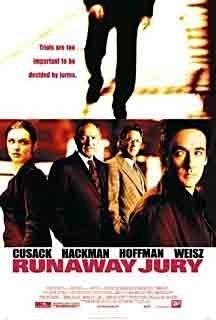 A juror on the inside and a woman on the outside manipulate a court trial involving a major gun manufacturer.

The thrilling legal movies on this list may even make up for your latest experience on Jury duty; includes 'The Firm', ' Primal Fear', and more.

Thrilling films based off the work of best-selling novelist, politician, and lawyer John Grisham. Note: we didn't include 'The Gingerbread Man', technically based off his work. We all make mistakes!