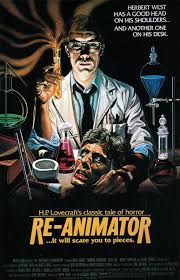 A dedicated student at a medical college and his girlfriend become involved in bizarre experiments centering around the re-animation of dead tissue when an odd new student arrives on campus.

A writer so distinctive the only way to properly describe him is Lovecraftian, which isn't much of a description at all; enjoy the best movies adapted from his work.