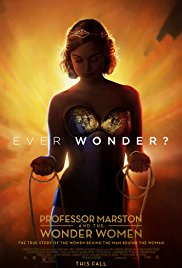 Professor Marston and the Wonder Women (2017)

Professor Marston and the Wonder Women (2017)

The story of psychologist William Moulton Marston, the polyamorous relationship between his wife and his mistress, the creation of his beloved comic book character Wonder Woman, and the controversy the comic generated.

Great contemporary films featuring iron-willed women who simply will not let the patriarchy win. Allow us to recommend the sensational 'Whale Rider'.