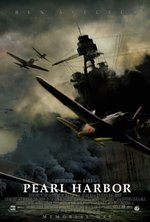 Pearl Harbor follows the story of two best friends, Rafe and Danny, and their love lives as they go off to join the war.