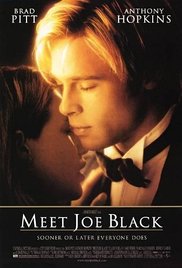 In order to understand life on Earth, Death takes the form of a young man and ultimately discovers love.

A collection of movies starring semi-human protagonists, fascinated by human emotion, and usually struggling with the experience of falling in love. You'll get it when you see them.