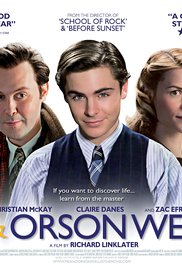 A teenager is cast in the Mercury Theatre production of "Julius Caesar" directed by a young Orson Welles in 1937.