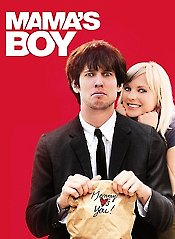 A twenty-nine year-old slacker who lives with his mom realizes his sweet set-up is threatened when she hears wedding bells with her self-help guru beau.