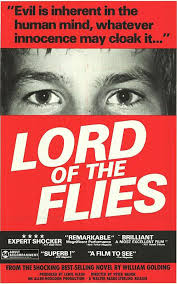 Stranded on an island, a group of schoolboys degenerate into savagery.

Movies Based on Nobel Prize Literature

Yes, yes - we know that books can't win Nobel prizes, just authors. But our titles can only be so long, and you get the picture: the best filmic adaptations of works written by Nobel prize winning authors.

'Movies Like The Princess Bride': Based on YA Literature Classics

Wow, what happened to Young Adults? YA literature from back in the day was all princesses, magical dragons, and noble horses. Now if you don't have people murdering each other in some kind of sick gauntlet you're irrelevant. Oh well, times change. Luckily we can revisit older, saner eras with collections like this one: of movies based on YA literature classics!

Classic tales of man vs nature, man vs man, and man vs self, including timeless cautionary classic 'The Lord of the Flies', sweeping aboriginal vision-quest 'Walkabout', and downright harrowing thriller 'The Edge'. The great outdoors never looked less appealing!