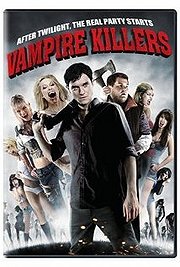 The title says it all really: a collection of undead women who like other undead women, and tend to serve a pretty lucky Count Dracula.