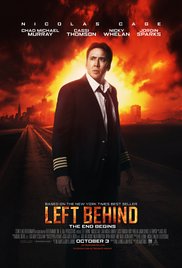 A small group of survivors are left behind after millions of people suddenly vanish and the world is plunged into chaos and destruction.