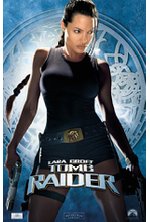 Video game adventuress Lara Croft comes to life in a movie where she races against time and villains to recover powerful ancient artifacts.