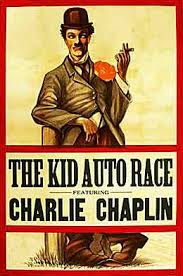 The Tramp wanders into and disrupts the filming of a go-kart race.