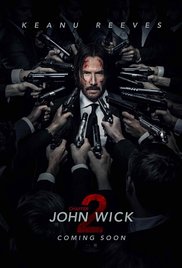 After returning to the criminal underworld to repay a debt, John Wick discovers that a large bounty has been put on his life.