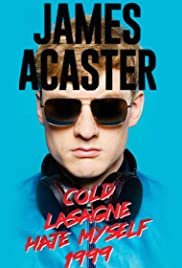 James Acaster performs at the Hackney Empire, discussing such topics such as brexit and mental health.