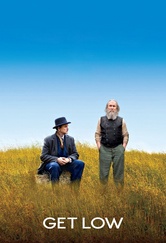 A movie spun out of equal parts folk tale, fable and real-life legend about the mysterious, 1930s Tennessee hermit who famously threw his own rollicking funeral party... while he was still alive.