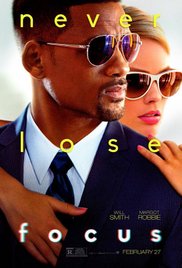 In the midst of veteran con man Nicky's latest scheme, a woman from his past - now an accomplished femme fatale - shows up and throws his plans for a loop.