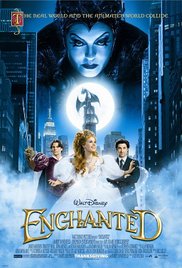 A princess, who is prepared to be wed, is sent away to New York by an evil queen, where she falls in love with a lawyer.