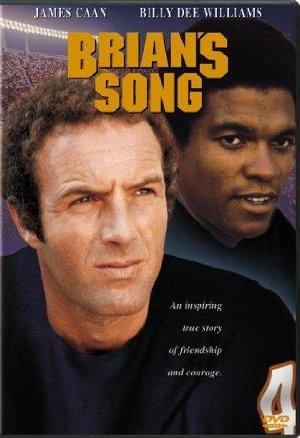 Based on the real-life relationship between teammates Brian Piccolo and Gale Sayers and the bond established when Piccolo discovers that he is dying.

The greatest tearjerkers from yesteryear tracing heroic patients as they come to terms with the final realities of life much sooner than they expected to, and must make peace with their fellow man, themselves, and the Almighty. Keep the Kleenex handy!

The best pig-skin packed sports dramas from over the decades, including tearjerker 'Brian's Song' and warming underdog story 'Rudy'.

Some of the all-time sporting greats never got to realize their full potential as their careers were cut short (or marred) by a sudden terminal illness. Such was the case for Heisman winning running back Ernie Davis, while Yankee first basemen Lou Gehrig, went out on top, but too soon. Others, the scrappy understudies who hang on to realize the dream of being a pro-player too were pulled from the roster, nit by desire but by disease. Most selected below are of actual men, the fictional account too pulls at the sense of mortality and the void a death leaves behind just as effectively. These are movies that will make any man with any sense of heart, bawl into his hankie. - Curated by Tom Meek; check out Tom's blog here

Athletic legends from yesteryear are immortalized in these compelling biopics. And considering most were around before steroids you know they deserve their legacies!