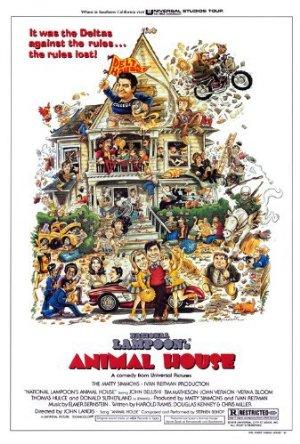 At a 1962 College, Dean Vernon Wormer is determined to expel the entire Delta Tau Chi Fraternity, but those trouble-makers have other plans for him.

Listen up Freshman, you're going to watch each and every of these frat comedies... while standing on one leg, and eating this whole bag of onions. Do you want in or not?

From 'Revenge of the Nerds' to 'Animal House', watch these college knuckleheads battle crusty deans, meatheads, and the occasional enraged girlfriend, all to defend their sacred, right to throw massive keggers while dressed in bedsheets!

This collection witnesses the glory days of the National Lampoon, before they birthed 'Glory Daze' and it all started going down hill. Ah well, revisit better times with such classics as 'Animal House', 'Vacation', and 'Loaded Weapon 1'.