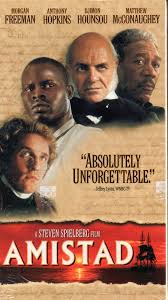 About a 1839 mutiny aboard a slave ship that is traveling towards the northeastern coast of America. Much of the story involves a court-room drama about the free man who led the revolt.

Movies Like To Kill a Mockingbird: Racial Trial Dramas

African-Americans fight institutional discrimination as they make their cases in these courtroom dramas, including 'To Kill a Mockingbird', 'Amistad', and 'The Hurricane'.